New Scientist: Is there a Planet X? 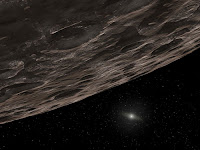 If we know enough to say the solar system is a filigree construction, we might reasonably assume we know where all its bits are. But lurking in the solar system's dark recesses, rumour has it, is an unsighted world - Planet X, a frozen body perhaps as large as Mars, or even Earth.
Planet X would be the most significant addition to the solar system since the discovery of Pluto, the now notorious non-planet, in 1930:
http://www.newscientist.com/article/mg20126932.200-is-there-a-planet-x.html
* Planet Gliese 581c and Planet X/Eris/Nibiru:
http://cristiannegureanu.blogspot.com/2009/01/astronomers-discover-earth-like-planet.html
Publicat de Cristi la 03:27