German Girl With Half-Empty Skull Sees Normally Through One Eye 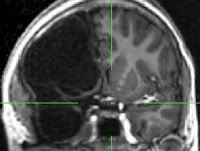 A 10-year-old German girl born with the left hemisphere of her brain is able to see normally through one eye.
The scans on the German girl, known as AH, showed that she had no right cerebral hemisphere which failed to develop for some inexplicable reason. A big part of her skull is just empty, computer tomography showed. However, the girl is witty, charming, and intelligent and takes part in physical activities such as roller-skating. Full story"
http://english.pravda.ru/science/mysteries/24-07-2009/108371-half_brain-0
* Other case (November 18, 2007) is that of a 39 years old Chinese woman, living a perfectly normal life, which, following medical investigations for a general state of dizziness and weakness, found out that she had only half a brain. Two statements:
- Dr. Zhang Linhong, director of Neural Rehabilitation Department at the Wuhan hospital, said: "On the MRI scans we were surprised to see that she only has grey matter on the right side. Our usual understanding is that the left brain controls language. But this patient has no problem communicating with people."
- The woman's mother: "She graduated from high school with very good marks. Her memory is very good. She remembers phone numbers and names immediately."
* LiveScience: Single Brain Cell Can Hold a Memory:
http://cristiannegureanu.blogspot.com/2009/01/livescience-single-brain-cell-can-hold.html
* The "Heart-Kidneys" Theory and the Psychology of the Future:
http://cristiannegureanu.blogspot.com/2008/10/heart-kidneys-theory-and-psychology-of.html
Publicat de Cristi la 01:25