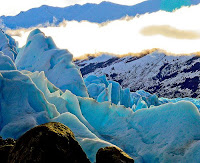 New research shows that the amount of carbon stored in frozen soils at high latitudes is double previous estimates and could, if emitted as carbon dioxide and methane, lead to a significant increase in global temperatures by the end of this century. The increased temperatures and permafrost melt could trigger the release of thousands of years of animal waste and other organic matter left behind on the Arctic tundra that have been sealed off from the environment by permafrost. Climate change is melting the permafrost and freeing mass quantities of prehistoric “ooze” from its state of suspended animation. Full Story:
http://www.dailygalaxy.com/my_weblog/2009/07/permafrost-melt-500-billion-tons-of-prehistoric-organic-matter-may-rapidly-accelerate-global-warming.html#more

* The Neptune’s moon, Triton is warming (BBC Science & Technology News, July 25, 1999).
- Pluto experiences an extraordinary heating (Massachusetts Institute of Technology News, October 9, 2002).
- Volcanic eruption on Jupiter’s satellite Io (Icarus Astronomy , November 2002).
- The warming of Mars (ABC News, December 7, 2002).
- The warming of Saturn (January 28, 2007, http://www.interstars.net): scientist of the UCLA (University of California, Los Angeles) – physics and astronomy department and those at the University of Boston have noticed that the temperature of the superior atmosphere of Saturn is higher that estimated. Thus, professor Allan Aylward at UCLA considers necessary the reexamination of the main hypotheses regarding the planetary atmosphere and establishing the cause of the respective heating. He also noticed a similar process on Mars, concluding: “Studying the aspects within other planetary atmospheres will help us to find out clues of the Terra’s future“….
* THE LOGICAL EXPLANATION of the warming process on Earth and on the other planets in our solar system proves to be the one provided by I. Velikovsky, in his book - Worlds in Collision - from 1950: “Two celestial bodies have been attracted one to each other. The inner masses of the Earth were pushed to the periphery. The Earth, with its rotation movement disturbed, started to warm“…