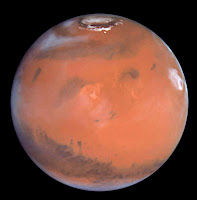 a) People have believed in the possibility of a Hollow Earth for well over a century. Now, some say there also may be a Hollow Mars... Astronomy guru Carl Sagan, long known as a skeptic when it came to extraterrestrials inhabiting our solar system or visiting the Earth, once believed that Phobos, one of the Martian Moons, may actually have been an artificial satellite built by the former or current inhabitants of Mars. Full story:
http://www.opednews.com/articles/1/The-Hollow-Earth-Hollow-M-by-Bill-Knell-081209-782.html
b) Real Mars, Hollow Mars.There is a photograph of Mars provided by the Hubble Space telescope:
http://www.holloworbs.com/real_mars.htm
c) The Book Hollow Earth by R. Bernard (online):
http://cristiannegureanu.blogspot.com/2008/11/hollow-earth.html