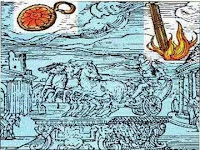 45,000 BC China: Rock carvings of round UFO-like objects have been found in China's Hunan province. The depictions date back to age of the Neanderthals... 1500 BC Egypt: The Palace of Pharaoh Thutmosis III. Circles of fire are said to have hovered over the palace while fishes, winged creatures, and other objects rained down from the sky... 99 BC Rome: In Tarquinia, there fell things like a flaming torch in different places from the sky. Towards sunset, a round object like a globe, or round or circular shield took its path in the sky, from west to east:
http://www.bibleufo.com/ufos.htm
Publicat de Cristi la 20:16