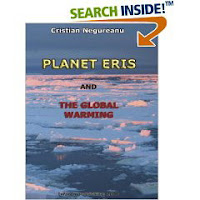 a) Plutoid Eris is Changing ... But We Don't Know Why..."We're really scratching our heads," says Stephen Tegler of Northern Arizona University in Flagstaff, author of the new Eris research (to be published in the journal Icarus)... two recent observations of Eris have shown a rapid change in the surface composition of the body... Normally, this would be expected if a planetary body approaches or travels away from the Sun:
http://www.universetoday.com/2008/11/10/plutoid-eris-is-changing-but-we-dont-know-why/
b) Andy Lloyd: 'This is a remarkable possibility. Xena (Xena was officially named 'Eris' in 2006 by the IAU) may in reality be a planet-sized comet!... However, the changes to the surface - which have been noted through complex studied carried out by different astrophysics teams - are taking place when Eris is at its most distant point from the Sun. Theoretically, it should be too cold for the ices to evaporate off at the moment, even in the sun-exposed areas. So how is the change occurring? This is yet another mystery posed by Eris':
http://www.darkstar1.co.uk/xena.html
c) NASA and Planet X:
http://cristiannegureanu.blogspot.com/2008/10/nasa-and-planet-x.html
d) Nibiru's alleged orbit:
http://www.australia.to/story/0,25197,23040466-941,00,00.html
e) Eris - the Red Planet and the Worlds in Collision:
http://cristiannegureanu.blogspot.com/2008/10/eris-red-planet-and-world-in-collision.html
f) Eris - the Planet of the Cross and the Natural Extreme Phenomena:
http://cristiannegureanu.blogspot.com/2008/10/eris-planet-of-cross-and-natural.html
g) AMAZON.COM: Planet Eris and the Global Warming - Cristian Negureanu:
http://www.amazon.com/Planet-Global-Warming-Cristian-Negureanu/dp/9738855071
h) Planeta Eris si incalzirea globala - EDITURA ANTET:
http://www.antet.ro/search.php?search=planeta+eris
http://www.antet.ro/ Tel. 0212221245