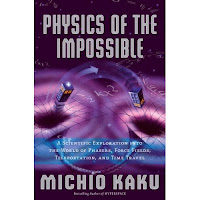 Prof Kaku: 'What is unthinkable today might not be forbidden in a few decades or centuries'
Teleportation and forcefields could become scientific realities within decades, and time travel will also be possible in the future, according to one of the world's leading physicists:
http://www.telegraph.co.uk/scienceandtechnology/science/sciencenews/3338074/Teleportation-and-forcefields-possible-within-decades,-says-Professor-Michio-Kaku.html
Prof Michio Kaku on the science behind UFOs and time travel:
http://www.telegraph.co.uk/scienceandtechnology/science/sciencenews/3337049/Prof-Michio-Kaku-on-the-science-behind-UFOs-and-time-travel.html
Future of science:'We will have the power of the gods.'(Professor Michio Kaku):
a) The Book of Enoch, Chapter 17:1-2:
This chapter begins with the description of a screen used by the Anunnaki/ Elohim - who moved along in the shape of energy globes - to rematerialize, taking a human shape. Then, a few geographical data about Eris/ Nibiru and/ or Gliese 581c follow:
"They raised me up into a certain place, where there was the appearance of a burning fire; and when they pleased they assumed the likeness of men.
They carried me to a lofty spot, to a mountain.":
http://cristiannegureanu.blogspot.com/2008/10/enoch-and-planet-eris-nibiru.html
b) Zecharia Sitchin, The Twelfth Planet:
"1. The SHU.GAR.RA she put on her head.
2. "Measuring pendants," on her ears.
3. Chains of small blue stones, around her neck.
4. Twin "stones," on her shoulders.
5. A golden cylinder, in her hands.
6. Straps, clasping her breast.
7. The PALA garment, clothed around her body... She is indeed clothed in a "PALA garment" ("ruler’s garment"), and on her head she wears the SHU.GAR.RA helmet - a term that literally means "that which makes go far into the universe." All this suggests to us that the attire of Inanna was that of an astronaut."
c) The Bible:
"The LORD appeared to Abraham …Abraham looked up and saw three man standing nearby(a sudden appearance from the parallel universe - A/N)… While they ate, he stood near them under a tree …the men turned away and went toward Sodom, but Abraham remained standing before the LORD …the two angels arrived at Sodom in the evening "(Genesis 18:1,2,8,22; 19:1):
http://cristiannegureanu.blogspot.com/2008/10/abraham-spaceships-of-gods-and.html
d) They are Here!:
http://cristiannegureanu.blogspot.com/2008/10/they-are-here.html
Publicat de Cristi la 06:19